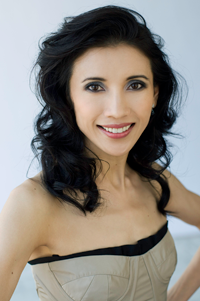 Born in Beijing, Chan Hon Goh received her dance training at the Goh Ballet Academy Canada, a classical institute in Vancouver British Columbia, founded by her parents Choo Chiat and Lin Yee Goh who are both former Principal Dancers with the National Ballet of China. In her student years, she became the first Canadian to be awarded a coveted prize at the Royal Academy of Dance’s Genée International Ballet Competition and the Prix de Lausanne before launching her professional career with the National Ballet of Canada in 1988. She rapidly progressed to Second Soloist in 1990, to First Soloist in 1992 and in 1994, Ms. Goh became the first ever Principal Dancer of Chinese heritage in the company’s history.

In her illustrious 20 year stage career, Ms. Goh employed her delicate lyricism and emotional depth to personify the essence of lead roles in ballets such as Romeo and Juliet, Swan Lake, The Sleeping Beauty, Onegin and the title roles in Giselle, Madame Butterfly and La Sylphide. She was known for the vibrancy and elegance she brought to her extensive Balanchine repertoire and had multiple roles created for her at the National Ballet of Canada. She was chosen to perform in the company’s premieres of works by contemporary choreographers John Neumeier, Christopher Wheeldon, and Jirí Kylián, among others.

An accomplished and gifted Canadian dance artist who successfully developed her talents into multiple artistic channels, Ms. Goh frequently appeared as a Guest Artist with the Suzanne Farrell Ballet (Kennedy Center for Performing Arts) and with major ballet companies in Europe, Australia, North America and Asia. Ms. Goh has also partnered with some of the most accomplished danseurs of our time, including Vladimir Malakov, Peter Boal and Johan Kolberg.

On May 31st 2009, Ms. Goh danced her farewell performance as Giselle to a sold out audience at the Four Seasons Centre for the Performing Arts in Toronto with the National Ballet of Canada. Her fans and colleagues paid tribute to her with standing ovations and numerous curtain calls.